It is expected surface blasting at the south portal will be complete in January. Focus of the John Hart Generating Station replacement project will turn to tunneling and underground cavern excavation in February.* 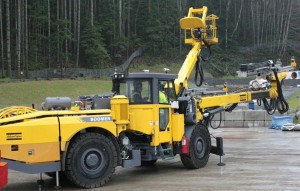 The Jumbo is an EC2 hydraulic drill by Altas Copco. This piece of equipment will play a key part in the mining operation about to begin as part of the John Hart Dam Generating Station Replacement project.

The water treatment centre has been successfully relocated to the north laydown area, and stream location near the north portal has been complete. The project team is now working out of the new project office at the former Campbellton school site. Intermittent closures of up to 15 minutes will continue at Brewster Lake Road through March; a planned three year road closure is expected to begin in April.