The City of Powell River has significant business opportunities over the next couple of years. Potential investments of tens of millions of dollars in Powell River will be moving forward if pending agreements are finalized; these projects were announced at a news conference held last week. 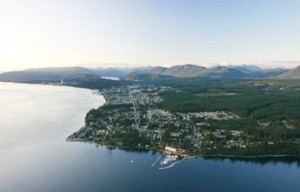 Here are the highlights from that meeting:

– AgriMarine Technologies has a vested interest in a potential aquaculture location near the Catalyst Paper Corporation Powell River Division mill. It is expected 30 to 50 jobs will be created  if the aquaculture facility is built.

– A medical marijuana venture, slated for the mill’s former administration building is in the evaluation state. The renovation of the old mill office would be a $2.5- to $3-million project and once completed could provide 30 to 50 full- and part-time jobs.

– Sino Bright wants to purchase land in Powell River to build an international school, which would accommodate 400 students. The property is near Brooks Secondary School.

– Upper Valley Aviation and Pacific Coastal Airline are hoping to occupy space at Powell River airport to carry out maintenance and refurbishing of aircraft. The city has offered the two companies 99-year leases for building facilities at the airport.

For more information on the news conference, go to The Powell River Peak website to read the article here.