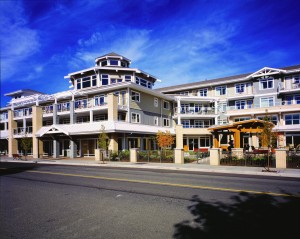 Berwick Retirement Home in Comox is proposing to expand its facility by adding 34 new units.

Berwick Investments Ltd. is submitting a new proposal to Comox council on Dec. 3 for consideration of a proposed expansion at the Berwick Retirement facility. The new design will include a five storey addition which will include 34 units, bringing the total number of seniors suites up to 166 units.

Campbell River city council has approved a major development permit application that will allow Steve Marshall Ford to relocate from its current location in downtown Campbell River to the southwest corner of Island Highway and Woodburn Road. The development includes a new building to house vehicle service areas, offices and the showroom.

The City of Powell River is currently processing applications for rezoning, an amendment to the Official Community Plan, and an exclusion from Agricultural Land Reserve (ALR) for the proposed Sino Bright School project. The applications are expected to go before council in December. Sino Bright has the option to purchase 132 acres of land in Powell River to build an international school, which would accommodate 400 students. Construction could start in the spring of 2016 once all approvals are in place.