Investment in non-residential construction totalled $12.4 billion in the second quarter, up 0.3% from the previous quarter. This increase follows three consecutive declines. Nationally, the gain was the result of an increase in spending on the construction of industrial and commercial buildings. 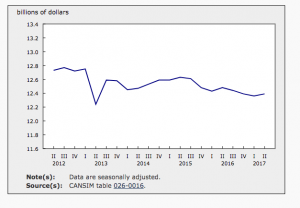 Overall, six provinces posted increases in the second quarter, with Ontario reporting the largest upturn, followed by British Columbia and New Brunswick. In British Columbia, the gain in non-residential construction was mainly the result of higher spending on commercial buildings. Spending on commercial buildings increased by 0.4% to $7.2 billion in the second quarter, led by office building and retail building construction.

Read the full report from Statistics Canada at: http://www.statcan.gc.ca/daily-quotidien/170717/dq170717b-eng.htm?