BC Hydro has announced two new major projects for the Campbell River region. Starting in 2018/19, BC Hydro will initiate seismic upgrades to the John Hart and Strathcona Dams. Work will begin once the John Hart Generating Station replacement project is complete. 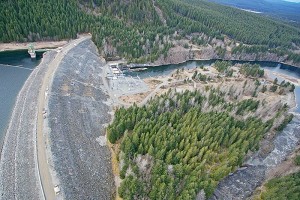 The Strathcona Dam (pictured here) and the John Hart Dam will receive seismic upgrades with hundreds of millions of dollars starting in 2018.

The seismic upgrades on the John Hart and Strathcona Dams on Vancouver Island are major undertakings, and are expected to cost in the hundreds of millions of dollars. BC Hydro is currently planning to start with upgrades on the John Hart Dam, focusing on the earthfill section. The upgrades will happen over a three-to-four year period, after which work on the Strathcona Dam will begin.

Work on the Strathcona Dam will focus on the generating station, relocating water intake control works, and upgrading the spillway gates. The project will also include construction of a low level outlet tunnel in the bedrock, to allow greater ability to draw down the reservoir if needed for emergency measures.

Although neither project will begin for at least four years, BC Hydro has already initiated consultation and community engagement with First Nations for the John Hart Dam project. Likewise, Hydro expects to procure suppliers and subcontractors much like it has for the John Hart Generating Station replacement project, meaning plenty of opportunities for Campbell River and Comox Valley labour and businesses. The Strathcona Dam project will enter preliminary planning stages in about a year.