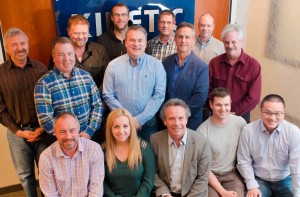 Tom joined Kinetic in 1999 and previously served as Courtenay Branch Manager for 10 years. He is a graduate of BCIT’s Building Technology program, is a Gold Seal Project Manager and has a Red Seal in carpentry. Tom has spent six months training and learning from Bill Gyles in order to prepare for his new role.

“It is both humbling and an honour to be asked to take over the leadership of Kinetic.” said Tom Plumb, Kinetic’s new president and CEO. “I’m excited to work with this exceptional team as we continue in our vision to grow in the Vancouver Island and Lower Mainland markets, as well as expand the number of employee shareholders.”

Gyles will continue working at Kinetic to help with this important transition, training and mentoring Tom and other senior employees. “It has been an honour to serve as Kinetic’s leader for the past 32 years,” Bill said. “Kinetic’s employees are a fantastic group of people to work with and have made my job easy.  I know Kinetic will continue thrive under Tom’s leadership.”

“Kinetic is an example of what can be achieved when you gather great people, provide a healthy and progressive culture, and let them do their work,” said Tom Plumb. “This is truly an exciting time to be at Kinetic.”

The new shareholder group met at the Annual General Meeting on Jan. 30, 2016 and elected these shareholders as Directors:

Micheal Gareau, Corporate Controller, is the most recent addition to the Board. Following the AGM, Kinetic’s Board of Directors unanimously appointed Tom Plumb as President and CEO.  Bill Gyles will continue in his role as Board Chair.

Kinetic Construction Ltd. is an employee-owned construction firm with offices located in Victoria, Courtenay and Richmond. Founded in 1984, Kinetic has completed hundreds of construction projects across BC and into Alberta ranging from commercial, industrial, institutional, and multi-unit residential buildings to bridges, civil structures and marine construction. Kinetic currently employs over 135 people in British Columbia. Kinetic is one of the largest contractors on Vancouver Island and is continuing its expansion into the Lower Mainland. For more information about Kinetic, visit  www.kineticconstruction.com.