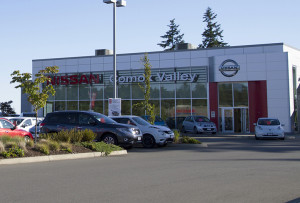 The Comox Valley Nissan is developing a five-acre site for two car dealerships and a recreational vehicle facility near Ryan Road.

Kinetic Construction has been appointed as the Construction Manager for the Comox Valley Nissan Development on a five acre site adjacent to Ryan Road. The site will consist of two car dealerships and a recreational vehicle facility. A development permit application is expected to be submitted in the spring of 2016.

Park Place Seniors Living has issued an information-only tender for sub-trades for the upcoming expansion to its Campbell River facility. In addition, the City of Campbell River has approved the development permit application for the construction of a three-storey, 36,000 sq. ft. addition to the New Horizons care facility on 14th Ave. Last year Park Place Seniors was selected as the preferred proponent by Island Health. This new wing will house 40 new publicly-funded care beds, and five new private-pay beds for a total residential care capacity of 126 publicly-funded and 13 private-pay beds.

Fish processing plant to be built in Tofino for Cermaq Canada

Plans are proceeding to construct a new 4,400 sq. ft. fish processing plant for Cermaq Canada in Tofino. A select tender is expected to be issued in early November.