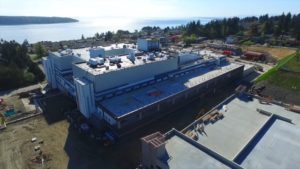 Construction of the North Island Hospitals Project is now substantially complete, and training, education and orientation of approximately 2,000 clinicians has now begun. Training is expected to take 3-4 months, and be complete in August of this year. The opening dates for the new hospitals have been set as September 10 for Campbell River and October 1 for the Comox Valley.

The CVRD is holding a meeting on May 25 regarding the updating of development cost charges (DCC’s) for water and sewer systems. Developers and land use consultants are invited to an information session about proposed bylaw changes for changes to the DCC’s. for water and sewer systems. Increases are proposed in most sectors. The presentation will take place at 3:00 pm (presentation starts at 3:15 pm) at the CVRD Boardroom at 550 Comox Road in Courtenay.

Referrals are currently underway for a proposed multi-phase 72-lot single family development along Joyce Avenue east of the Powell River hospital. The city received a rezoning application for the project in January. The application would rezone the land from A2 to RM1, and the application includes a proposal for 12-lots in Phase 1. Once referrals are complete, city staff will submit a report to council to initiate first and second reading.