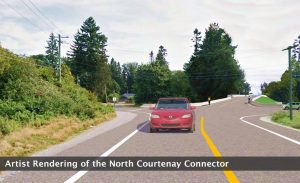 This artist rendering shows what the North Courtenay Connector may look like when it is complete. A tender for this project is expected in September.

The tender for the North Courtenay Connector is expected to be released in September. Work is expected to begin in the fall of 2016 or the spring of 2017, dependent on weather conditions. The proposed North Courtenay Connector road will be situated 3 kilometres north of the Courtenay City centre, near the Comox Valley Exhibition Grounds. The roadway will run west from Dove Creek Road at Headquarters Road to Piercy Road – where Piercy continues to Highway 19.

Site servicing is underway at the Tyee Plaza in Campbell River for the 46-unit residential apartment building at 1299 Shoppers Row, slated to be under construction within the week. The building will have a footprint of 808m2 (8,702 ft2) and total area of 3161m2 (34,028 ft2). The remainder of the parcel will be developed as surface parking and landscaped area. This development will see some of the first rental apartment units being added to the downtown area in Campbell River in many years.

The City of Powell River has been advised that partners Inclusion Powell River and Golden Life Management expect to make a development application in the early Fall for a proposed 77-unit seniors housing next to Powell River General Hospital. The intention is to build on a 3.5-acre parcel located on Joyce Avenue between Evangel Church and the pole line. If the project proceeds, it is expected the facility will be open by the end of 2017.