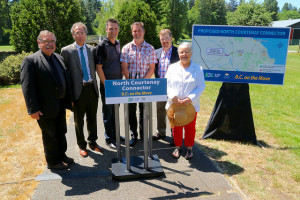 In June of last year, the provincial government announced a new 10-year transportation plan, including work to improve the connection between Highway 19 and north Courtenay.

An announcement is expected to be forthcoming from the Ministry of Transport and the City of Courtenay once the design work has been completed on the proposed route of the connector road from the Inland Island Highway. Improvements will include approximately 700 metres of new two-lane road which will run from Dove Creek Road where it intersects at Headquarters Road to the intersection of Piercy Road and Dove Creek Road. The Tsolum River bridge will also be upgraded to a two-lane bridge.

The City of Campbell River is holding their first public open house on Tuesday, March 8 at the Maritime Heritage Centre for the Sustainable Official Community Plan & Zoning Update. This drop-in event will run from 6 to 9 p.m., with a presentation at 7 p.m. and opportunities for people to learn more and share their ideas.

School District #84 Vancouver Island West is seeking a contractor to demolish an 8,561 sq. ft. single story, timber frame school in Zeballos. Items and contents are to be recycled/salvaged where possible. Work is to be completed by September 30, 2016. Mandatory site visit will be held on March 8, 1 p.m. at the site of the old Zeballos school at 116 Maquinna Avenue, Zeballos, BC.