Last week the Canadian Council for Public-Private Partnerships (CCPPP) gave the John Hart Generating Station Replacement Project a national gold award at the National Awards for Innovation and Excellence in Public-Private Partnerships. It may also be the first public-private partnership for a hydroelectric project in North America. InPower BC, which consists of companies like SNC-Lavalin, Aecon, and Frontier-Kemper, won the project contract. 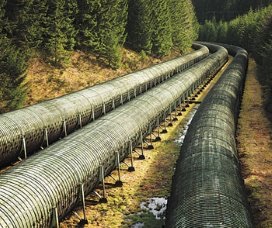 “It is a bit of a P3 hybrid that we developed where the contractor designs, builds and partially finances the project,” said BC Hydro’s Stephen Watson. “InPower BC did a great job on the innovative design. The construction is underway and planned commissioning is in 2018, followed by a 15-year operating period where BC Hydro pays the 40% of the financing back to InPower BC based on facility performance. InPower BC’s annual maintenance schedule over the 15 years will be coordinated with BC Hydro staff. BC Hydro operates the facility throughout the process.”

The $1.093 billion John Hart project will promote economic growth in Campbell River with project construction for the next five years. The number of people working at the site currently is about 70, and this will increase to about 200 workers by spring 2015 and peak at about 360 workers in 2016.