Construction is beginning on the cofferdam, the next critical stage in the John Hart Generating Station replacement project. The cofferdam is necessary to create a new water intake tunnel for the underground generating station, and will create a dry work environment to allow the project team to drill through rock under the concrete blocks of the spillway dam. 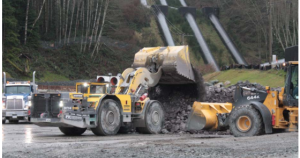 This photo shows rock being removed from the tunnels at the John Hart Dam generating station replacement project site and loaded into a tandem dump truck.

This work requires significant engineering, environmental planning, and the review or approval by multiple parties including independent reviewers. Work on the cofferdam is expected to continue through to December.

Drilling and blasting is expected to continue until June. BC Hydro and InPower BC did received noise complaints in March relating to the blasting, and haven taken steps to further mitigate noise and sound waves from the blasting. However, blasting is moving further underground, and it’s expected the depth will substantially dissipate noise, causing no further community concern.

Environmental work is ongoing, including the removal of small amounts of contaminated soil, water quality monitoring, and planning and preparation for upcoming work. For more information on the John Hart Generating Station replacement project, visit the BC Hydro website.