June was another strong month for BC building intentions and aligns with the view that construction, led by residential activity, will be a growth leader for the provincial economy this year. Municipalities issued permits valued at $1.12 billion during the month, up 16 per cent from May and 35 per cent above the same month in 2014. 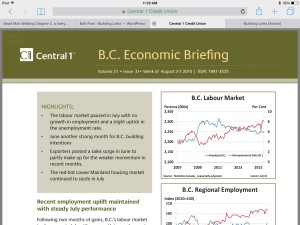 The Central 1 Credit Union has released its economic brief for the province of British Columbia for the month of August.

This was the third time this year that total permit volume breached the billion-dollar mark. Looking past month-to-month volatility, which is the rule rather than the exception for permits owing to the influence of large apartment projects and non-residential buildings, intentions are trending well ahead of a year ago and are up 24 per cent year-to-date.

Through the first half of the year, residential permit volume was up 32 per cent and trending at the strongest pace since the mid-2000s, as low interest rates and modest economic growth drove new home construction and renovation investment. Regionally, year-to-date growth is being led by housing market demand in Metro Vancouver (32 per cent) and Kelowna (40 per cent), with Victoria also exhibiting a robust gain of 18 per cent. Among the largest urban areas monthly permit volume is expected to range from $900 million to $950 million, and construction will remain a growth sector for the economy with residential strength offsetting weakness in the non-residential sector.