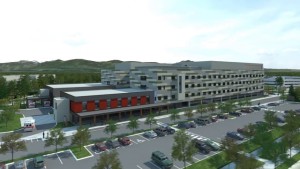 The $606.2 million North Island Hospitals Project – which includes a new 95-bed acute facility in Campbell River and a new 153-bed acute facility in the Comox Valley, was celebrated for its leadership in innovative financing, socio-economic benefits and environmental standards. It featured the first green bond issued in North America to fund a public-private partnership. The project is expected to generate approximately 1,900 direct and 1,400 indirect jobs during construction.

The hospitals are setting new environmental goals. They have been designed in accordance with the BC Hydro Power Smart Program, which requires improved energy efficiency. The facilities have also been designed to maintain LEED Gold Certification energy and greenhouse gas emissions targets, operating period sustainability requirements and support British Columbia’s commitment to incorporate wood products into the project design and construction of the facilities.