The North Island Hospitals Project (NIHP) reported a total of 543 people working on the new hospital construction sites in August, the highest monthly total since construction began one year ago. Local workers made up two-thirds of the total in August and three-quarters (78 per cent) of the workforce in September. 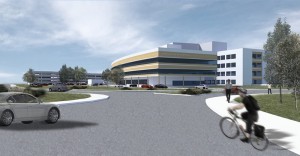 This is an artist’s rendition of the new Comox Valley hospital currently under construction at the intersection of Ryan Road and Lerwick in Courtenay.

Project partners, the Industry Training Authority, local School Districts, North Island College, the North Vancouver Island Aboriginal Training Society and others have been working to develop apprenticeship and other training programs and employment opportunities. In August, there were 101apprentices working on the project in areas including plumbing/mechanical, electrical, carpentry, walls & ceilings and more.

Construction of the new hospitals will create an estimated 2,200 direct jobs and more than 1,400 indirect jobs over the life of the project. Employment numbers are expected to reach their peak by early summer 2016. The $606.2 million North Island Hospitals Project includes a new $331.7 million, 153-bed Comox Valley Hospital in Courtenay on Lerwick Road near Ryan Road, and a new $274.5 million, 95-bed Campbell River Hospital on the existing hospital site at 375 – 2nd Avenue. Both hospitals are scheduled for completion by late 2017.