Around Town: Lumber prices rising due to BC Forest Fires

Fires across BC intensified during the past week and has displaced 37,000 people from their homes, disrupted mining and forestry operations and damaged public utilities. Wood prices can rise as high as 6 percent if operations remain shut for weeks said Ketan Mamtora, an analyst with BMO Capital Markets in a recent interview. 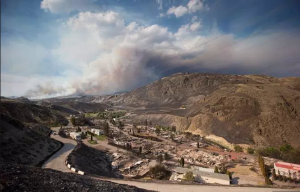 Forest fires in the BC interior are expected to increase wood prices, as operations shut down due to evacuation orders and nearby fires. Prices could rise 6 to 14 percent if operations remain shut for weeks or months.

Forestry companies that have suspended production include West Fraser Timber Co and privately held Tolko, among the largest Canadian producers, and Norbord Inc, the world’s largest maker of oriented strand board, a plywood-like material used in house building.

Mamtora said West Fraser’s shutdown represents a loss of about 6.7 percent of interior British Columbia’s lumber production and 13.8 percent of Canada’s plywood production, while Norbord’s shut mill represents 5.6 percent of Canadian production of oriented strand board. The companies said the facilities were shut due to evacuation orders and nearby fires, although the sites themselves were not burned. Mamtora said prices could increase up to 14 percent if the sites remain shut for months.