I visited the John Hart Information Centre last month and took in the view from the new suspension bridge over Elk Falls . It is spectacular! Inside the information centre, there is a large map showing the potential new changes to the John Hart Dam. 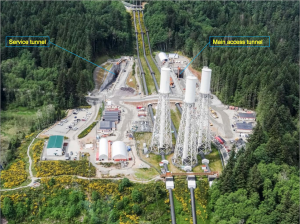 This photo of the John Hart Dam Generating Station replacement project shows some of the work currently happening onsite. Photo supplied by BC Hydro.

Here are some timelines for the project schedule that have been posted on the BC Hydro site: