The City of Campbell has approved its 2015 budget. This year’s budget includes a 1.7% property tax increase (equal to approximately $24 per year for the average Campbell River home valued at $264,200), and no increase for the business class (which remains at 21%). Properties in the Managed Forest Lands and the Utilities tax classes will continue to see a phased increase that was started in 2014. 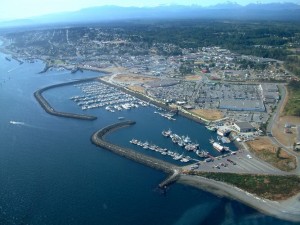 An aerial view of the City of Campbell River. City council approved several infrastructure projects in the 2015 budget.

The operating budget for 2015 will be $62 million, with another $15.7 million for capital projects not funded through property taxation. Campbell River council approved extensive capital plans for sewer and water infrastructure in the 2015 budget. A major upgrade to Highway 19A from Simms Creek to McCallum Park is also proposed but is dependent upon Build Canada senior government grant funding.

Highlights of capital projects approved, and paid either through reserve funding, senior government grants or borrowing are: