The North Island Hospitals Project (NIHP) reached an important milestone recently with the first-time energizing of the main electrical rooms in the new Comox Valley and Campbell River hospitals. 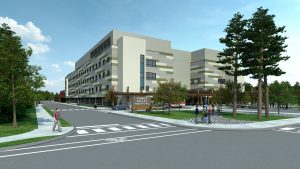 The new Comox Valley and Campbell River hospitals were energized for the first time in October. This was an important milestone in the North Island Hospitals Project.

Energizing the main electrical rooms set the stage to spread power throughout the hospitals via a 600-volt distribution network. That voltage can be further stepped down to levels required by specific hospital equipment, as well as the standard 120-volt level.

Once the hospitals were energized, the information technology systems were set up. Each hospital will feature an amazing level of interconnectivity. Overall, the two new hospitals will have roughly 13,000 network connections.

Over the life of the project, construction of the new facilities will have created an estimated 2,200 direct jobs and more than 1,400 indirect jobs. Monthly employment figures peaked in April 2016 with more than 1,000 workers, including 290 apprentices, working at the two sites. Roughly two-thirds of the workforce is local and approximately 92 per cent from Vancouver Island.

For more information go to the news page on the North Island Hospitals Project website: http://nihp.viha.ca/news/